differenced with a Crescent impaled with unknown arms quartered 1 Argent a fess between 3 martlets Gules in chief three fox heads erased 2 per pale Azure three fleur de lys Or 3 Or three talbots courant 4 Or a chevrom Limine between 3 stags heads cabossed. The note below states ... The above tablet (a copy of the original in Great Bedwyn) is placed here by Algernon 15th Duke of Somerset

Times Newspaper Marriages. 21 Apr 1899. Marriage of Lord Crewe and Lady Peggy Primrose.
The marriage of Lady Margaret (Peggy) Primrose (18), younger daughter of the Earl of Rosebery (51), with the Earl of Crews (41), which took place at Westminster Abbey yesterday, was remarkable, not only as a brilliant spectacle, bat also on account of the extraordinary degree of public interest which the event evoked, and the testimony thus afforded to the popularity of the late Prime Minister. It was an ideal day for a wedding, the sun shining brilliantly. Parliament Square and the approaches to the Abbey early in the day presented a gay and animated spectacle. An hour or more before the time announced for the opening of the Abbey doors, and a couple of hours before the bridal party were expected, people began to collect in the Abbey precincts, and in a short time great crowds were stretching right away to the railings of the Houses of Parliament. As time wore on and the vast concourse grew into extraordinary dimensions the police on duty had the utmost difficulty in regulating the living mass. Taffic became congested, and the constables in some cases were swept off their feet by the surging and panting multitude, but everywhere the best of good humour seemed to prevail in the streets.
Meanwhile the interior of the Abbey was also the centre of much life and movement. The wedding was fixed for 1:30, aud the doors, at each of which a long queue of ticket-holders and others had long been patiently waiting, were opened three-quarters of an hour earlier. Immediately the throngs, in which the bright costumes of the ladies were conspicuous, wwept into the Abbey. None-ticket holders were admitted by the north door only. This entrance was literally besieged, and a quarter of an hour after it was opened it had to be closed, for in that brief space the northern transept-the porLion of the Abbey allotted to the general public-had become so densely packed that it would not hold another spectator. Those privileged visitors who held permits either for tue nave or the south transept seemed none the less eager to secure advantageous places, for every one came early. Many of the ladies stood upon the seats in their eagerness to obtain a good view. As the guests arrived Sir Frederick Bridge played an appropriate selection of music upon the grand organ.
The rare spectacle of floral decorations in the Abbey attracted general attention. At each end of the alter rails there was a towering palm with a collection of Lilium Harrisii and marguerites grouped at the base, while blooms of Liliam Harrisii also adorned the altar itself. Specimen palms with foliage and flowering plants were placed against the organ screen facing the western entrance, by which the bridal party were shortly to enter.
The arrival of the specially invited guests also proved a source of much interest. These privileged persons, numbering some 500 or 600, friends of the contracting parties and including men distinguished in politics, diplomacy, literature, and art, were escorted to seats in the choir and under the lantern. The Earl of Crewe (41), with his best man, the Earl of Chesterfield (45)

, was received by Lord Rosebery's sons, Lord Dalmeny (17) and the Hon. Neil Primrose (16), by whom he was conducted to the Jerusalem Chamber. The Duke of Cambridge (80), who quickly followed, attended by Colonel FitzgGeorge, was met at the same door by the Hon. Neil Primrose, under whose escort he joined the Prince of Wales, after which their Royal Highnesses went to the choir and took the seats which had been specially reserved for then.
Among the others present were: The Duchess of Buckingham and Chandos, the Marquis and Marchioness of Breadalbane, the Duke and Duchess of Buccleuch. Mr. Balfour M.P., the Duke (52)

, and Miss Mildred Carter (22), only daughter of Mr. J. Ridgely Carter (46), American Minister to Rumania, and Mrs. Ridgely Carter (45), took place yesterday at St. George's, Hanover-square. The Sub-Dean of the Chapels Royal (the Rev. Edgar Sheppard, D.D.) performed the ceremony, assisted by the Rev. David Anderson and other clergy, and Mr. Ridgely Carter (46) gave his daughter away. She wore a very simple wedding gown of soft white satin with a long train draped with old point de Venise, and a Venetian lace cap over a spray of myrtle and orange blossom, covered by a plain tulle veil. Master David Stanley, Master Julian Ward, and Miss Diana Roberts, dressed all in white, followed the bride, and there were seven bridesmaids, Lady Theo Acheson (28) (sister of the bridegroom), Lady Victoria Stanley, Mlle. Irene deo La Grange, Miss Canilla Morgan, the Hon. Rhoda Astley, Miss Elsie Nicholl, and Miss Marian Scranton, who wore white chiffon dresses with draped bodices and wreaths of myrtle beneath tulle veils. They also wore diamond neckislides and carried loose bunches of red roses. The Hon. Patrick Acheson (26) was best man to his brother.
Mrs. Ridgely Carter (45) afterwards held a large reception at Dorchester House (lent by the American Ambassador and Mrs. Whitelaw Reid), and among the many who came on from the church were the French, Russian, German, Spanish, and Italian Ambassadors, the Danish Minister, tho Rumanian Minister, the Swedish Minister and Countess Wrangel, Mme. Dominguez, the Servian Charge d'Affaires and Mme. Grouitel, the Chilian Minister and Mme. Gana, the Belgian Minister and Countess de Lalaing, the Duke (63)

and Lady Irene Denison (19), the Earl 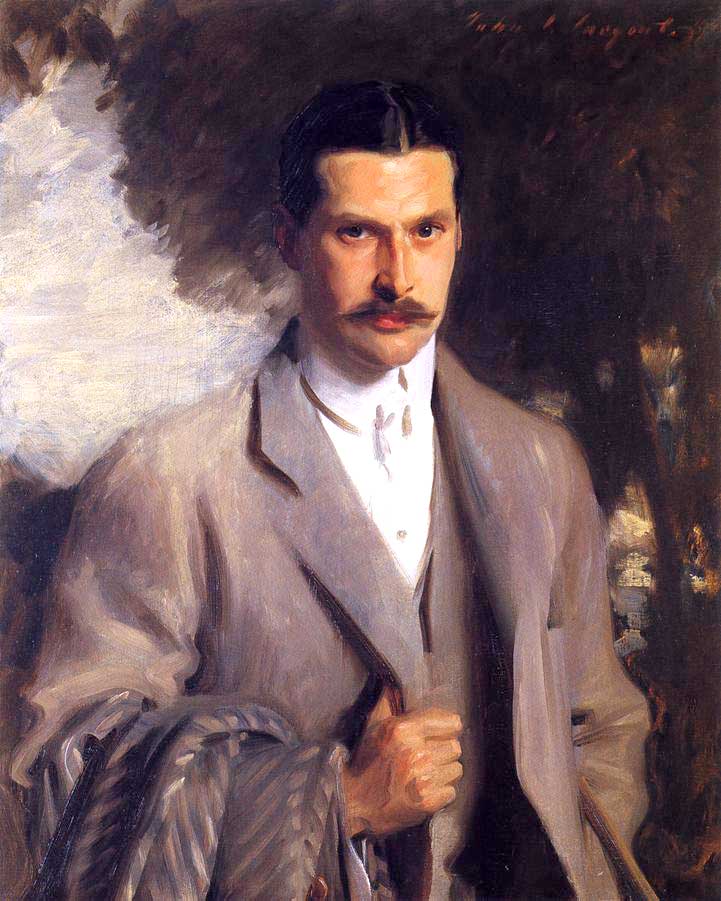 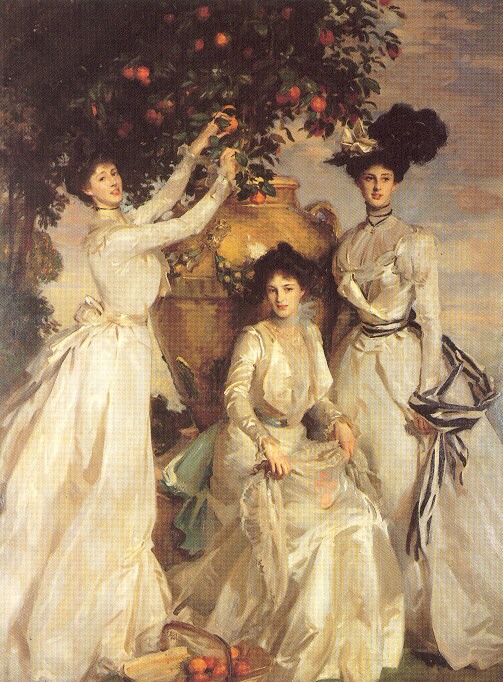 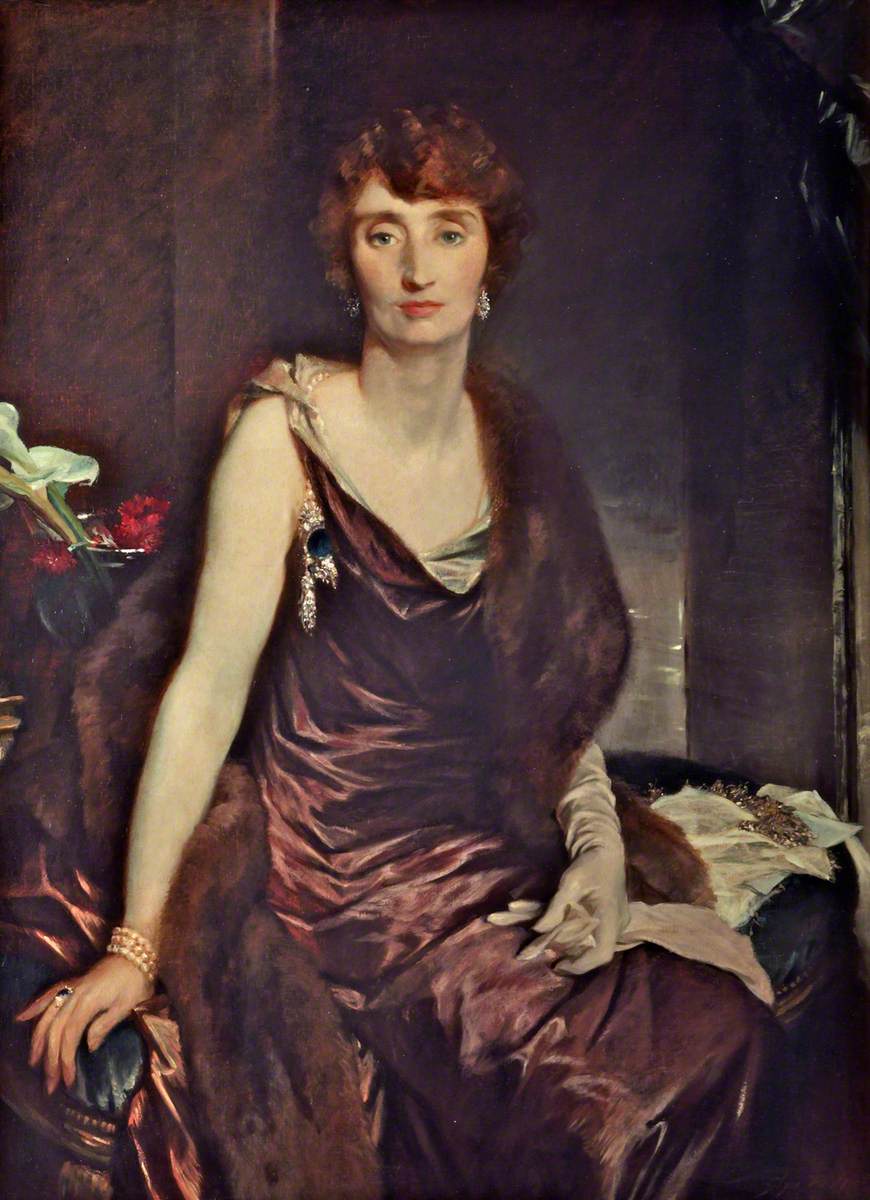