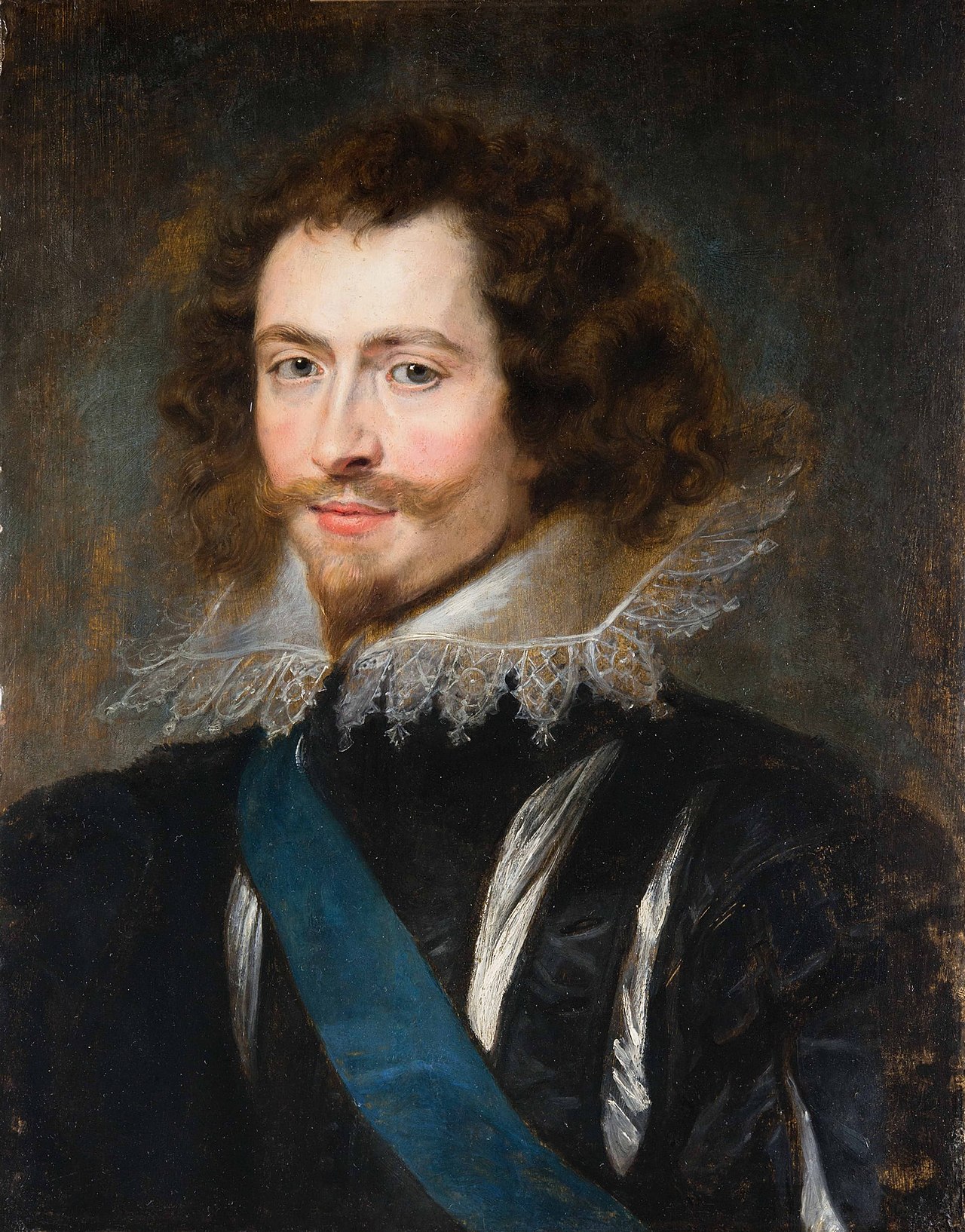 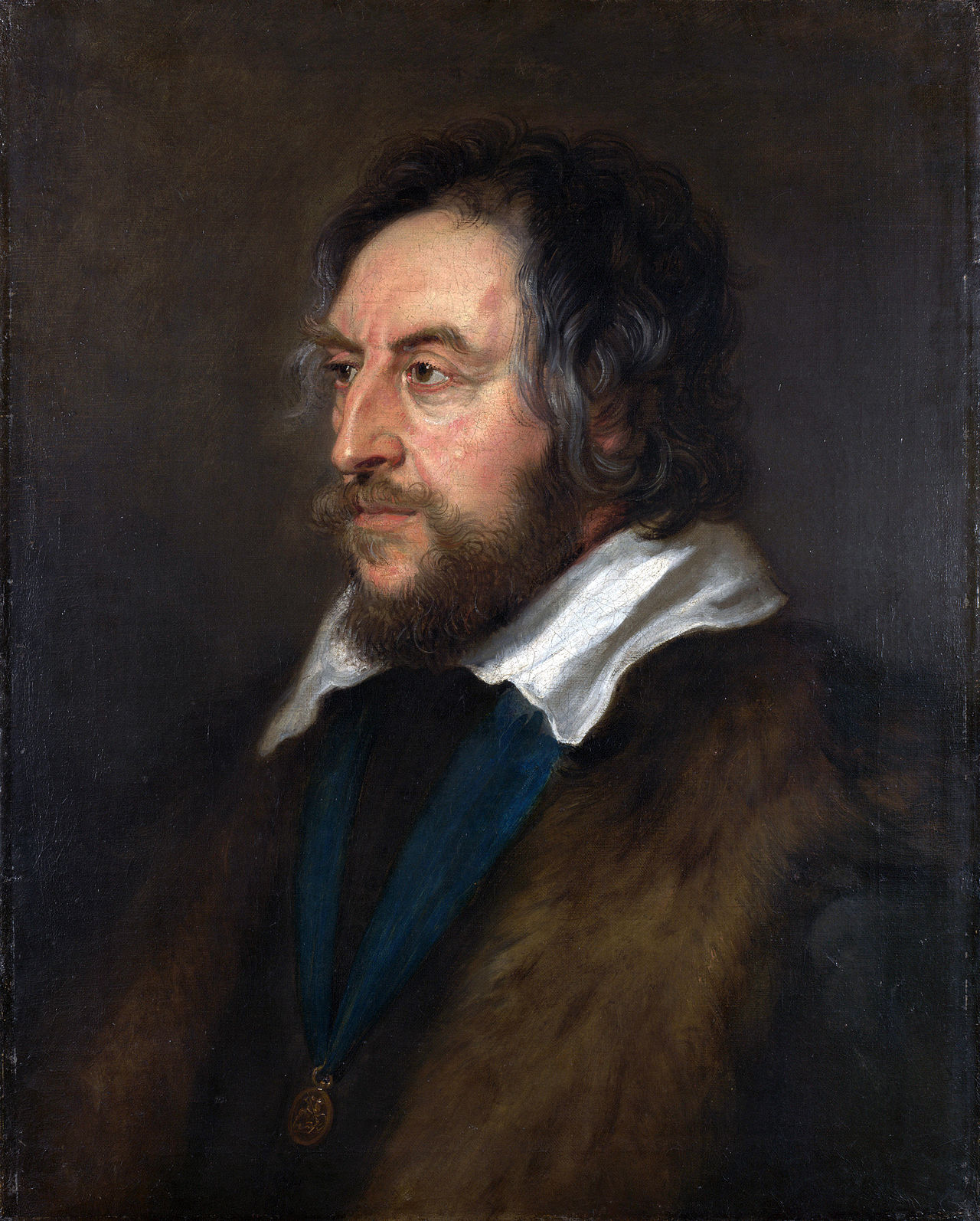 John Evelyn's Diary 1641 October. 04 Oct 1641. We sailed by several Spanish forts, out of one of which, St. Mary's port, came a Don onboard us, to whom I showed my Spanish pass, which he signed, and civilly dismissed us. Hence, sailing by another man-of-war, to which we lowered our topsails, we at length arrived at Antwerp.
The lodgings here are very handsome and convenient. I lost little time; but, with the aid of one Mr. Lewkner, our conductor, we visited divers churches, colleges, and monasteries. The Church of the Jesuits is most sumptuous and magnificent; a glorious fabric without and within, wholly incrusted with marble, inlaid and polished into divers representations of histories, landscapes, and flowers. On the high altar is placed the statue of the Blessed Virgin and our Saviour in white marble, with a boss in the girdle set mth very fair and rich sapphires, and divers other stones of price. The choir is a glorious piece of architecture; the pulpit supported by four angels, and adorned with other carvings, and rare pictures by Rubens, now lately dead, and divers votive tables and relics. Hence, to the Vrou Kirk, or N6tre Dame of Antwerp: it is a very venerable fabric, built after the Gothic manner, especially the tower, which I ascended, the better to take a view of the country adjacent; which, happening on a day when the sun shone exceedingly bright, and darted his rays without any interruption, afforded so bright a reflection to us who were above, and had a full prospect of both land and water about it, that I was much confirmed in my opinion of the moon's being of some such substance as this earthly globe. Perceiving all the subjacent country, at so small an horizontal distance, to repercuss such a light as I could hardly look against, save where the river and other large water within our view, appeared of a more dark and uniform colour, resembling those spots in the moon supposed to be seas there, according to Hevelius, and as they appear in our late telescopes. I numbered in this church thirty privileged altars, that of St. Sebastian adorned with a painting of his martyrdom.
We went to see the Jerusalem Church, affirmed to have been founded by one who, upon divers great wagers, passed to and fro between that city and Antwerp on foot, by which he procured large sums of money, which he bestowed on this pious structure. Hence, to St. Mary's Chapel, where I had some conference wdth two Enghsh Jesuits, confessors to Colonel Jaye's regiment. These fathers conducted us to the Cloister of Nuns, where we heard a Dutch sermon upon the exposure of the Host. The Senate-house of this city is a very spacious and magnificent building.

John Evelyn's Diary 1641 October. 08 Oct 1641. Being the morning I came away, I went to see the Prince's Court, an ancient, confused building, not much unlike the Hofft, at the Hague: there is here likewise a very large Hall, where they vend all sorts of wares. Through this we passed by the chapel, which is indeed rarely arched, and in the middle of it was the hearse, or catafalco, of the late Archduchess, the wise and pious Clara Eugenia. Out of this we were conducted to the lodgings, tapestried with incomparable arras, and adorned with many excellent pieces of Rubens, old and young Breugel, Titian, and Stenwick, with stories of most of the late actions in the Netherlands.
By an accident, we could not see the library. There is a fair terrace which looks to the vineyard, in which, on Pedestals, are fixed the statues of all the Spanish kings of the house of Austria. The opposite walls are painted by Rubens, being an history of the late tumults in Belgia : in the last piece, the Archduchess shuts a great pair of gates upon Mars, who is coming out of hell, armed, and in a menacing posture; which, with that other of the Infanta taking leave of Don Philip the Fourth, is a most incomparable table.
From hence, we walked into the park, which for being entirely within the walls of the city is particularly remarkable; nor is it less pleasant than if in the most solitary Recesses; so naturally is it furnished with whatever may render it agreeable, melancholy, and country-like. Here is a stately heronry, divers springs of water, artificial cascades, rocks, grots, one whereof is composed of the extravagant roots of trees cunningly built and hung together with wires. In this park are both fallow and red deer.
From hence, we were led into the Menage, and out of that into a most sweet and dehcious garden, where was another grot of more neat and costly materials, full of noble statues, and entertaining us with artificial music; but the hedge of water, in form of lattice-work, which the fountaineer caused to ascend out of the earth by degrees, exceedingly pleased and surprised me; for thus with a pervious wall, or rather a palisade hedge of water, was the whole parterre environed.
There is likewise a fair aviary; and in the court next it are kept divers sorts of animals, rare and exotic fowl, as eagles, cranes, storks, bustards, pheasants of several kinds, and a duck having four wings. In another division of the same close are rabbits of an almost perfect yellow colour.
There was no Court now in the palace, the Infante Cardinal (32), who was the Governor of Flanders, being dead but newly, and every one in deep mourning.
At near eleven o'clock, I repaired to his Majesty's (40)

agent. Sir Henry De Vic (42), who very courteously received me, and accommodated me with a coach and six horses, which carried me from Brussels to Ghent, where it was to meet my Lord of Arundel (56)

, Earl Marshal of England, who had requested me when I was at Antwerp to send it for him, if I went not thither myself.
Thus taking leave of Brussels and a sad Court, yet full of gallant persons, (for in this small city, the acquaintance being universal, ladies and gentlemen, I perceived, had great diversions and frequent meetings,) I hasted towards Ghent. On the way, 1 met with divers little waggons, prettily contrived and full of peddling merchandises, dravm by mastiff-dogs, harnessed completely like so many coachhorses; in some four, in others six, as in Brussels itself I had observed. In Antwerp I saw, as I remember, four dogs draw five lusty children in a chariot: the master commands them whither he pleases, crying his wares about the streets. After passing through Ouse, by six in the evening, I arrived at Ghent. This is a city of so great a circumference, that it is reported to be seven leagues round; but there is not half of it now built, much of it remaining in fields and desolate pastures even within the walls, which have strong gates towards the west, and two fair churches.
Here I beheld the Palace wherein John of Gaunt

and Charles V were born; whose statue stands in the market-place, upon a high pillar, with his sword drawn, to which (as I was told) the magistrates and burghers were wont to repair upon a certain day every year with ropes about their necks, in token of submission and penance for an old rebellion of theirs; but now the hemp is changed into a blue ribbon. Here is planted the basilisco, or great gun, so much talked of. The Lys and the Scheldt meeting in this vast city, divide it into twenty-six islands, which are united by many bridges, somewhat resembling Venice. This night I supped with the Abbot of Andoyne, a pleasant and courteous priest. 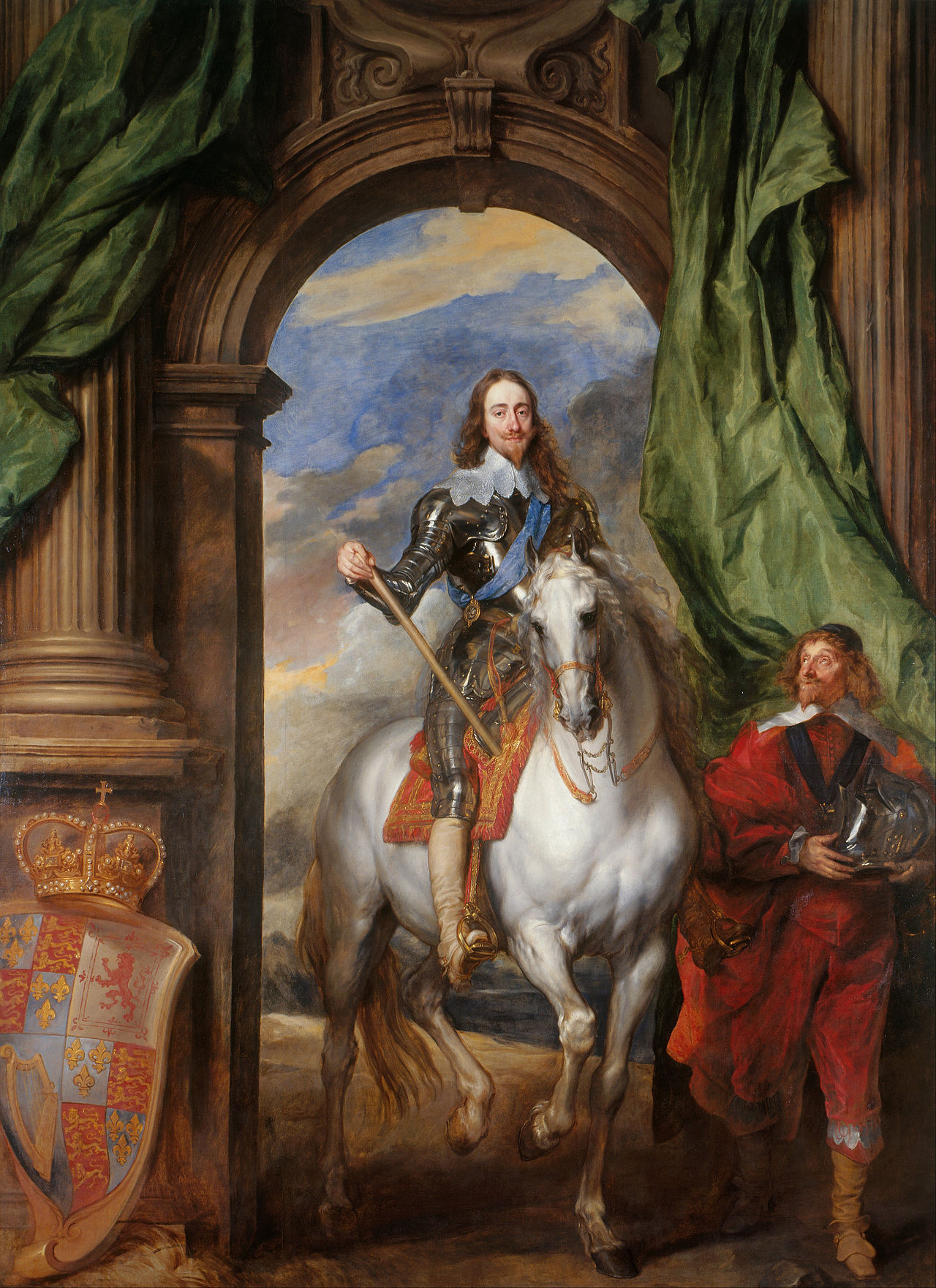 known as Charles I with M.De St Antoine. 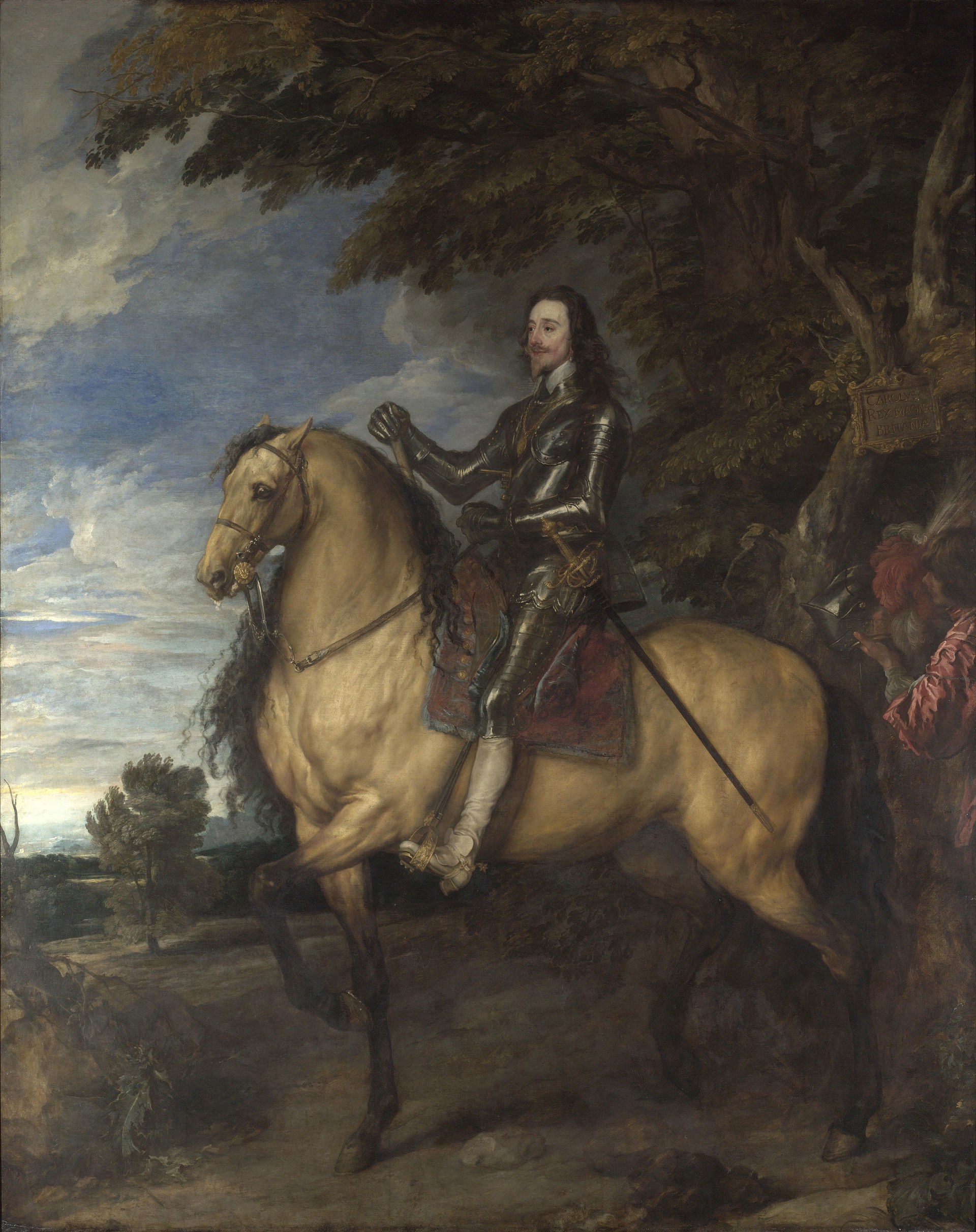 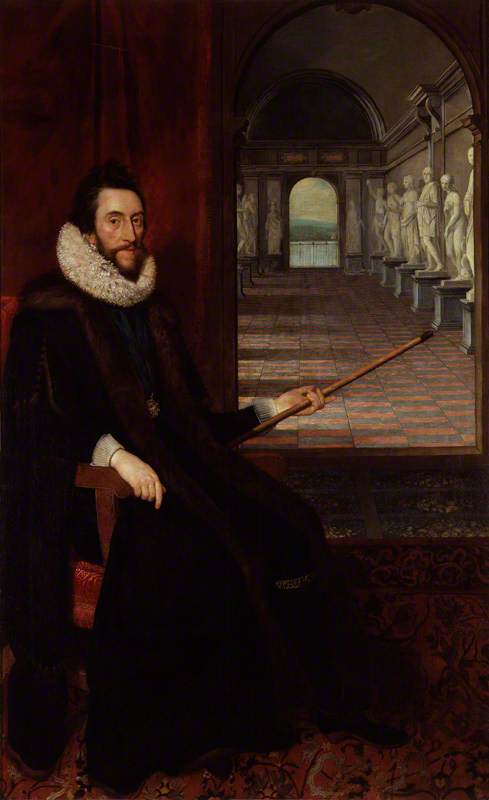 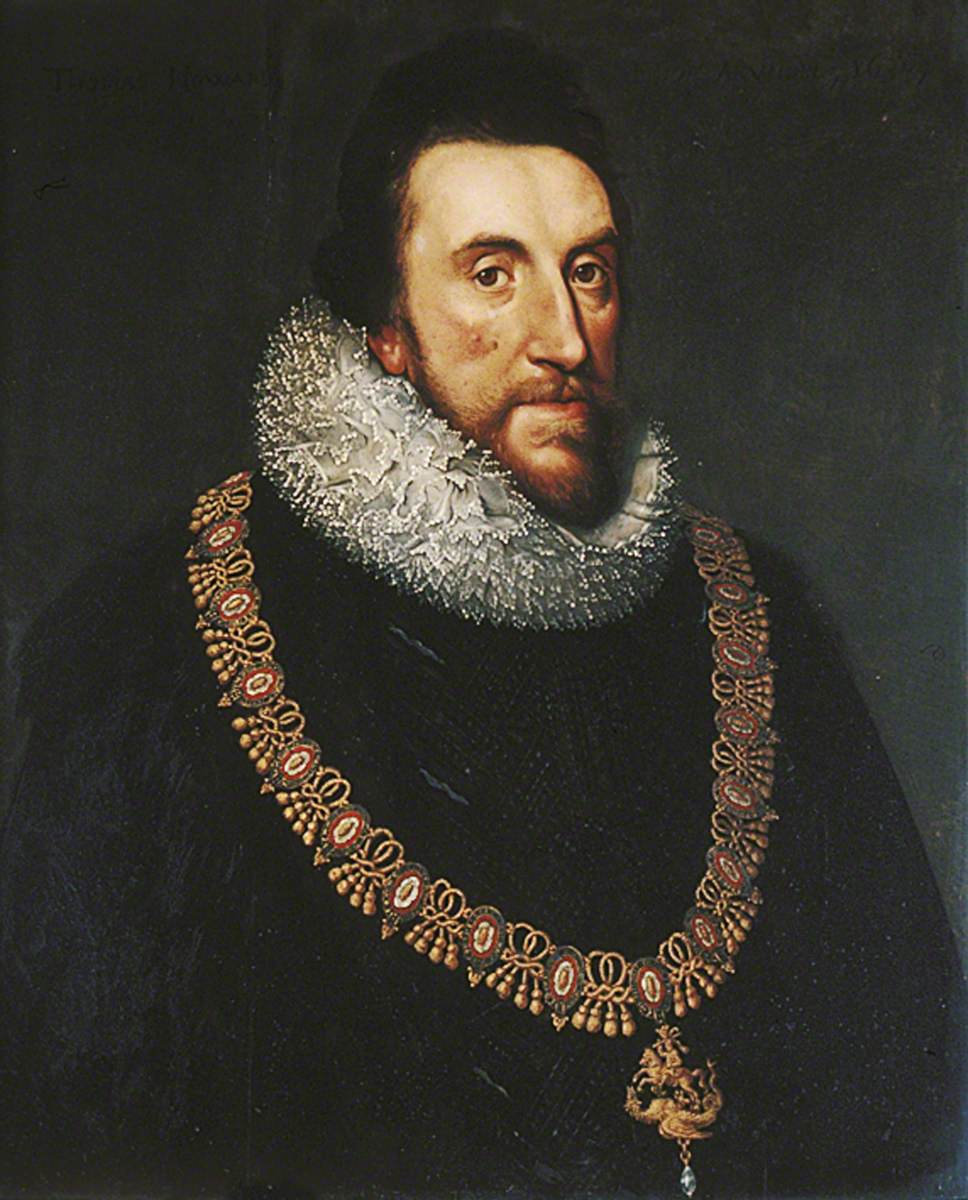 and wearing his Garter Collar. 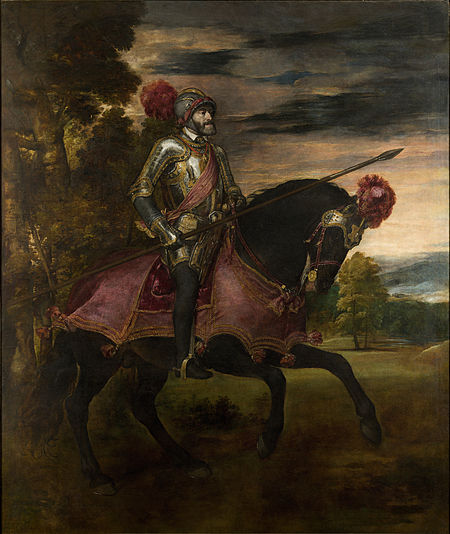 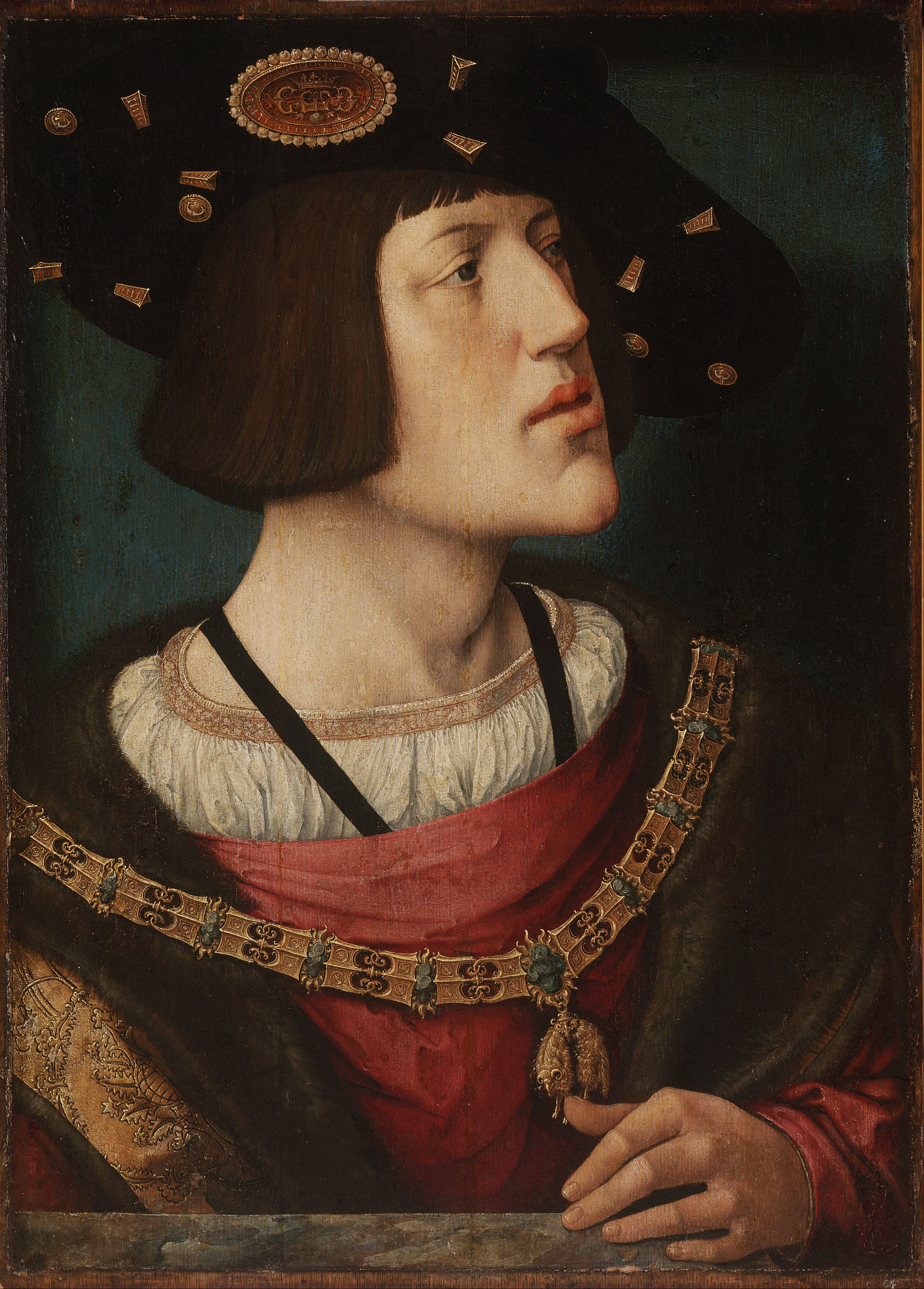 at Rome, and engaged to his creditors here. Lord Mulgrave (45) and Sir Edward Seymour (60)

came to my house, and desired me to go with them to the sale. Divers more of the great lords, etc., were there, and bought pictures dear enough. There were some very excellent of Vandyke, Rubens, and Bassan. Lord Godolphin (48)

bought the picture of the Boys, by Murillo the Spaniard, for 80 guineas, dear enough; my nephew Glanville, the old Earl of Arundel's head by Rubens, for £20. Growing late, I did not stay till all were sold.

when Duke of York. 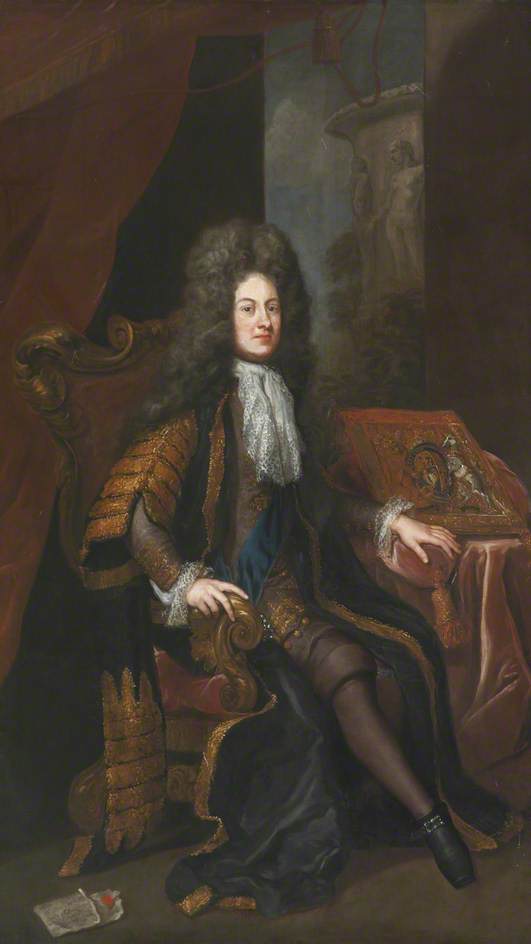