Royalty of England Great Britain and the United Kingdom

Heir to the Throne of England

Duke of Richmond and Somerset

Earl Baldwin of Bewdley in Shropshire

Earl of Crewe in Cheshire

Earl of Lytton in Derbyshire

Earl Newport in the Isle of Wight

Viscount Bridgeman of Leigh in Shropshire

Viscount Cecil of Chelwood of East Grinstead in Sussex

Viscount Keppel of Elveden in Suffolk

Viscount Newport of Bradford in Shropshire

Viscount Rochdale of Rochdale in County Palatine of Lancaster

Baron Ampthill of Ampthill in Bedfordshire

Baron Arden of Arden in Warwickshire

Baron Ashford of Ashford in Kent

Baron Beaulieu of Beaulieu in Hampshire

Baron Berwick of Attingham in Shropshire

Baron Brownlow of Belton in Lincolnshire

Baron Burghclere of Walden in Essex

Baron Byron of Rochdale in Lancashire

Baron Cawdor of Castlemartin in Pembrokeshire

Baron Culpeper of Thoresway in Lincolnshire

Baron Compton of Compton in Warwickshire

Baron Cowdrey of Tonbridge in Kent

Baron Denny of Waltham in Essex

Baron Deramore of Belvoir in County Down

Baron Digby of Sherbourne in Dorset

Baron Dunmore of Dunmore in the Forst of Athole in Perthshire

Baron Dynevor of Dynevor in Camarthenshire

Baron Epsom of Hyde in Surrey

Baron Glenlyon of Glenlyon in Perthshire

Baron Glenconner of The Glen in Peebles

Baron Hamilton of Hamilton in Leicestershire

Baron Harewood of Harewood in Yorkshire

Baron Hay of Pedwardine in Herefordshire

Baron Houghton of Great Houghton in the West Riding of Yorkshire

Baron Hunsdon of Scutterskelfe in the County of York

Baron Ilchester and Stavordale of Redlynch in Somerset

Baron Lansdowne of Bideford in Devon

Baron Leigh of Stoneleigh in Warwickshire

Baron Methuen of Corsham in Wiltshire

Baron Mount Temple of Lee in the County of Southampton

Baron Mulgrave of Mulgrave in Yorkshire

Baron Newburgh of Newburgh in Anglesey

Baron Ormonde of Llanthony in Monmouthshire

Baron Penrhyn of Llandegai in Carnarvonshire

Baron Revelstoke of Membland in Devon

Baron Ribblesdale of Gisburne Park in the West Riding of Yorkshire

Baron Rochdale of Rochdale in Lancashire

Baron Rutherford of Nelson of Cambridge in Cambridgeshire

Baron Sackville of Knole in Kent

Baron Sheffield of Butterwick in Lincolnshire

Baron Shute of Beckett in Berkshire

Baron Stuart of Wortley in the City of Sheffield

Baron Teynham of Teynham in Kent

Baron Vernon of Kinderton in Cheshire

Baron Vivian of Glynn and Truro in Cornwall

Baron Wemyss of Wemyss in Fife

Baron Wharncliffe of Wortley in Yorkshire

Baron Wodehouse of Kimberley in Norfolk

Baronet Allen of Totteridge in Middlesex

Baronet Assheton of Middleton in Lancashire

Baronet Aubrey of Llantrithyd in Glamorganshire

Baronet Bateman of How Hall in Norfolk

Baronet Bicester aka Bisseter in Oxfordshire

Baronet Blackwood of the Navy

Baronet Blunt of the City of London

Baronet Carr of Sleaford in Lincolnshire

Baronet Carteret of Metesches in Jersey

Baronet Chamberlayne of Wickham in Oxfordshire

Baronet Clarges of St Martin's in the Fields in Middlesex

Baronet Clere of Ormesby in Norfolk

Baronet Colebrooke of Gatton in Surrey

Baronet Cookes of Norgrove in Worcestershire

Baronet Cooper of Rockbourne in Southampton

Baronet Corbet of Stoke on Tern

Baronet Crane of Chilton in Suffolk

Baronet Crowe of Llanherne in the Carmarthenshire

Baronet Cullum of Hastede in Suffolk

Baronet Curzon of Kedleston in Derbyshire

Baronet Davers of Rougham in Suffolk

Baronet Delaval of Seaton in Northumberland

Baronet Delves of Dodington in Cheshire

Baronet Dering of Pluckley in Kent

Baronet Dormer of Wyng in Buckinghamshire

Baronet Drury of Overstone in Northamptonshire

Baronet Edwards of Garth in Montgomeryshire

Baronet Felton of Playford in Suffolk

Baronet Gell of Hopton in Derbyshire

Baronet Gough of Edgebaston in Warwickshire

Baronet Gould of the City of London

Baronet Gower of Stittenham in Yorkshire

Baronet Graham of Netherby in Cumberland

Baronet Grosvenor of Eaton in Cheshire

Baronet Guise of Elmore in Gloucestershire

Baronet Hamner of Hamner in Flintshire

Baronet Heathcote of Hursley in the County of Southampton

Baronet Hobart of Intwood in Norfolk

Baronet Hotham of Scorborough in Yorkshire

Baronet Hungate of Saxton in Yorkshire

Baronet Hyde of Albury in Hertfordshire

Baronet Isham of Lamport in Northamptonshire

Baronet Kemp of Gissing in Norfolk

Baronet Knyvet of Buckenham in Norfolk

Baronet Langham of Cottesbrooke in Northamptonshire

Baronet Lawley of Spoonhill in Shropshire

Baronet Leicester of Tabley in Cheshire

Baronet Leman of Northaw in Hertfordshire

Baronet Lombe aka Jodrell of Salle Park in Norfolk

Baronet Lort of Stackpole in Pembrokeshire

Baronet Lucy of Broxbourne in Hertfordshire

Baronet Mainwaring of Over Peover

Baronet Maynard of Walthamstow in Essex

Baronet Paston of Paston and Oxnead

Baronet Pocock of Hart in County Durham and Twickenham in Middlesex

Baronet Poole of Poole in Cheshire

Baronet Russell of Chippenham in Wiltshire

Baronet Shaw of Eltham in Kent

Baronet Smithson of Stanwick in Yorkshire

Baronet Spring of Pakenham in Suffolk

Baronet Talmash of Helmingham in Suffolk

Baronet Throckmorton of Coughton in Warwickshire

Baronet Trollope of Casewick in Lincolnshire

Baronet Vernon of Hodnet in Shropshire

Baronet Webb of Odstock in Wiltshire

Baronet Wheler of the City of Westminster

Baronet Wilbraham of Woodhey in Cheshire

Baronet Winchcombe of Bucklebury in Berkshire

Baronet Wyndham of Orchard in Somerset

Baronet Yate of Buckland in Berkshire

Bishop of Bath and Wells

Order of the Garter

John Evelyn's Diary 22 April 1667. 22 Apr 1667. Saw the sumptuous supper in the banqueting-house at Whitehall, on the eve of St. George's day, where were all the companions of the Order of the Garter.

John Evelyn's Diary 28 August 1670. 28 Aug 1670. One of the Canons preached; then followed the offering of the Knights of the Order, according to custom; first the poor Knights, in procession, then, the Canons in their formalities, the Dean and Chancellor, then his Majesty (40)

, being all the Knights that were then at Court.
I dined with the Treasurer (40)

, and consulted with him what pieces I was to add; in the afternoon the King (40)

took me aside into the balcony over the terrace, extremely pleased with what had been told him I had begun, in order to his commands, and enjoining me to proceed vigorously in it. He told me he had ordered the Secretaries of State to give me all necessary assistance of papers and particulars relating to it and enjoining me to make it a LITTLE KEEN, for that the Hollanders had very unhandsomely abused him in their pictures, books, and libels.
Windsor was now going to be repaired, being exceedingly ragged and ruinous. Prince Rupert (50)

, the Constable, had begun to trim up the keep or high round Tower, and handsomely adorned his hall with furniture of arms, which was very singular, by so disposing the pikes, muskets, pistols, bandoleers, holsters, drums, back, breast, and headpieces, as was very extraordinary. Thus, those huge steep stairs ascending to it had the walls invested with this martial furniture, all new and bright, so disposing the bandoleers, holsters, and drums, as to represent festoons, and that without any confusion, trophy-like. From the hall we went into his bedchamber, and ample rooms hung with tapestry, curious and effeminate pictures, so extremely different from the other, which presented nothing but war and horror.
The King (40)

passed most of his time in hunting the stag, and walking in the park, which he was now planting with rows of trees. 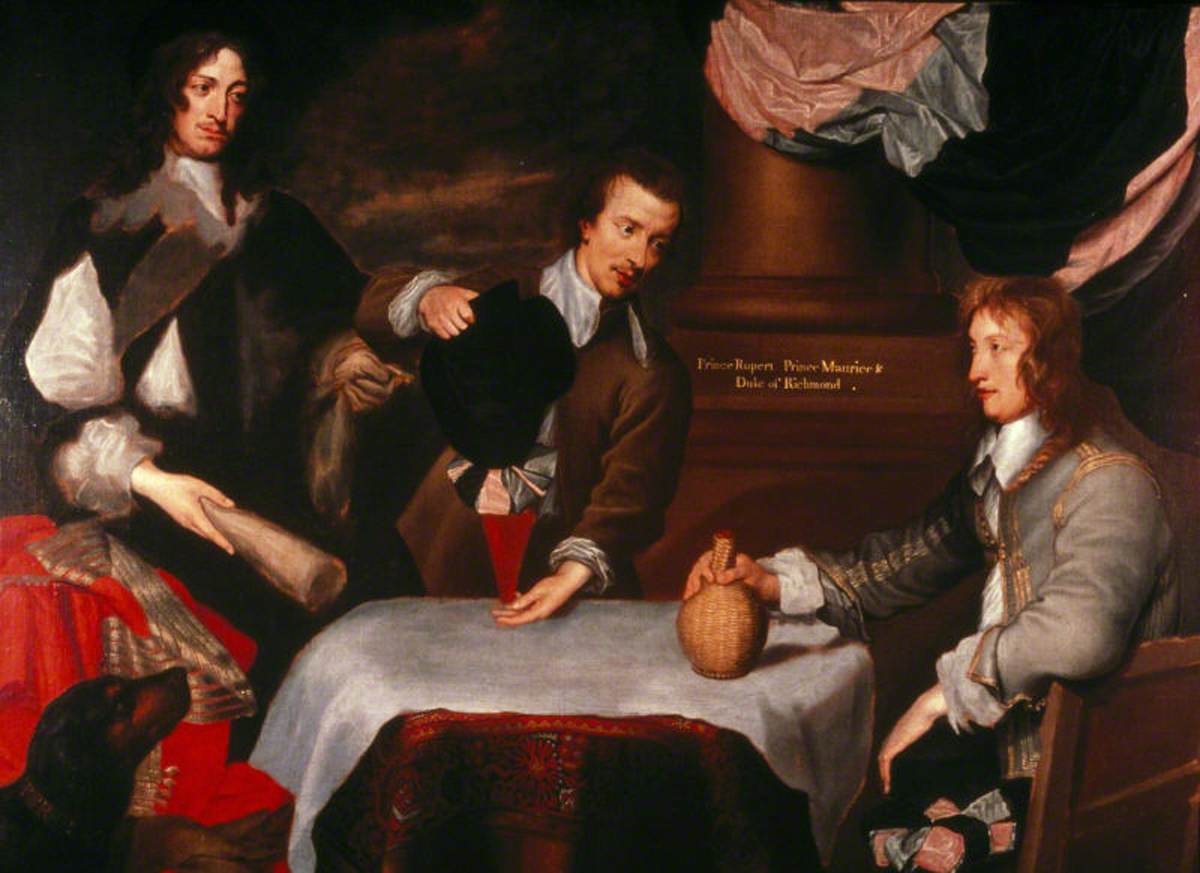 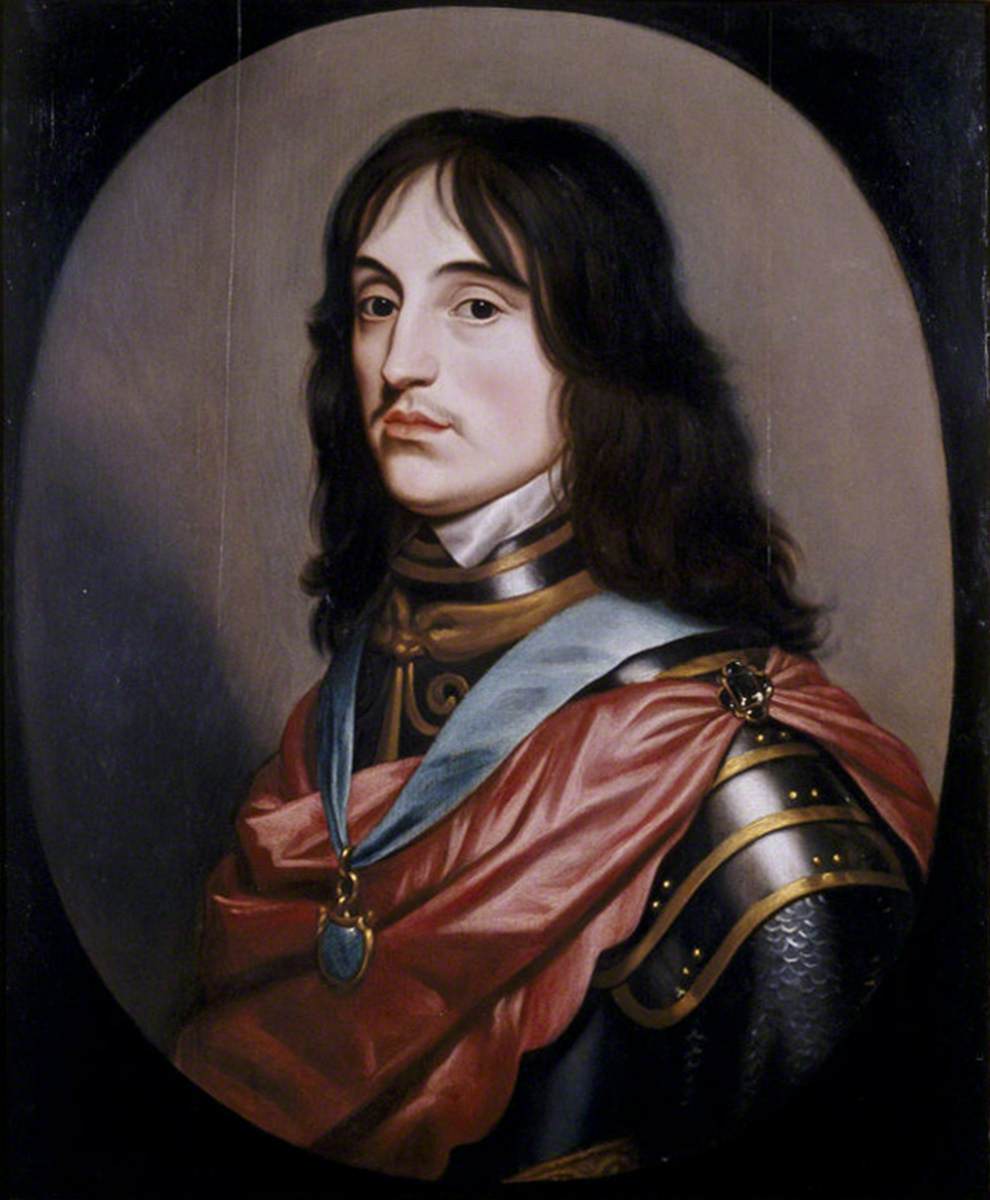 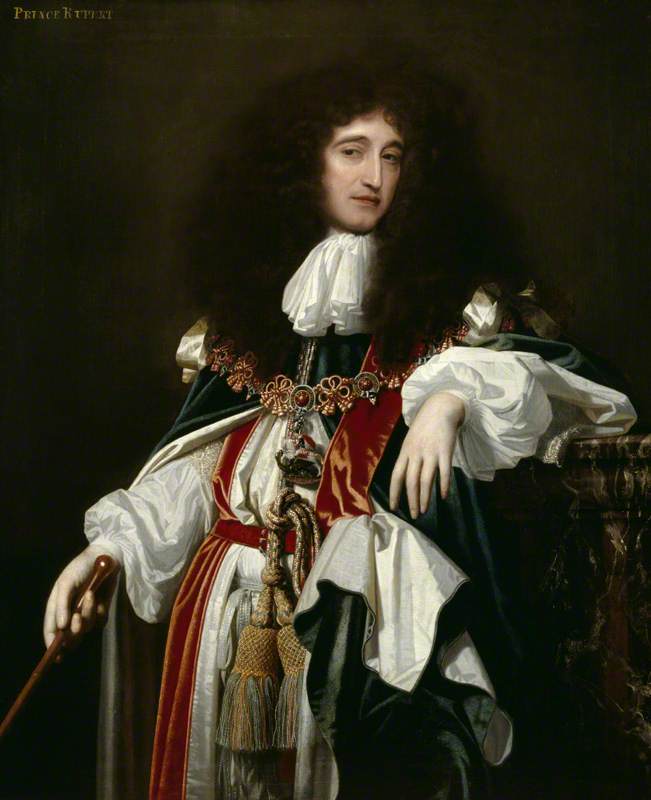 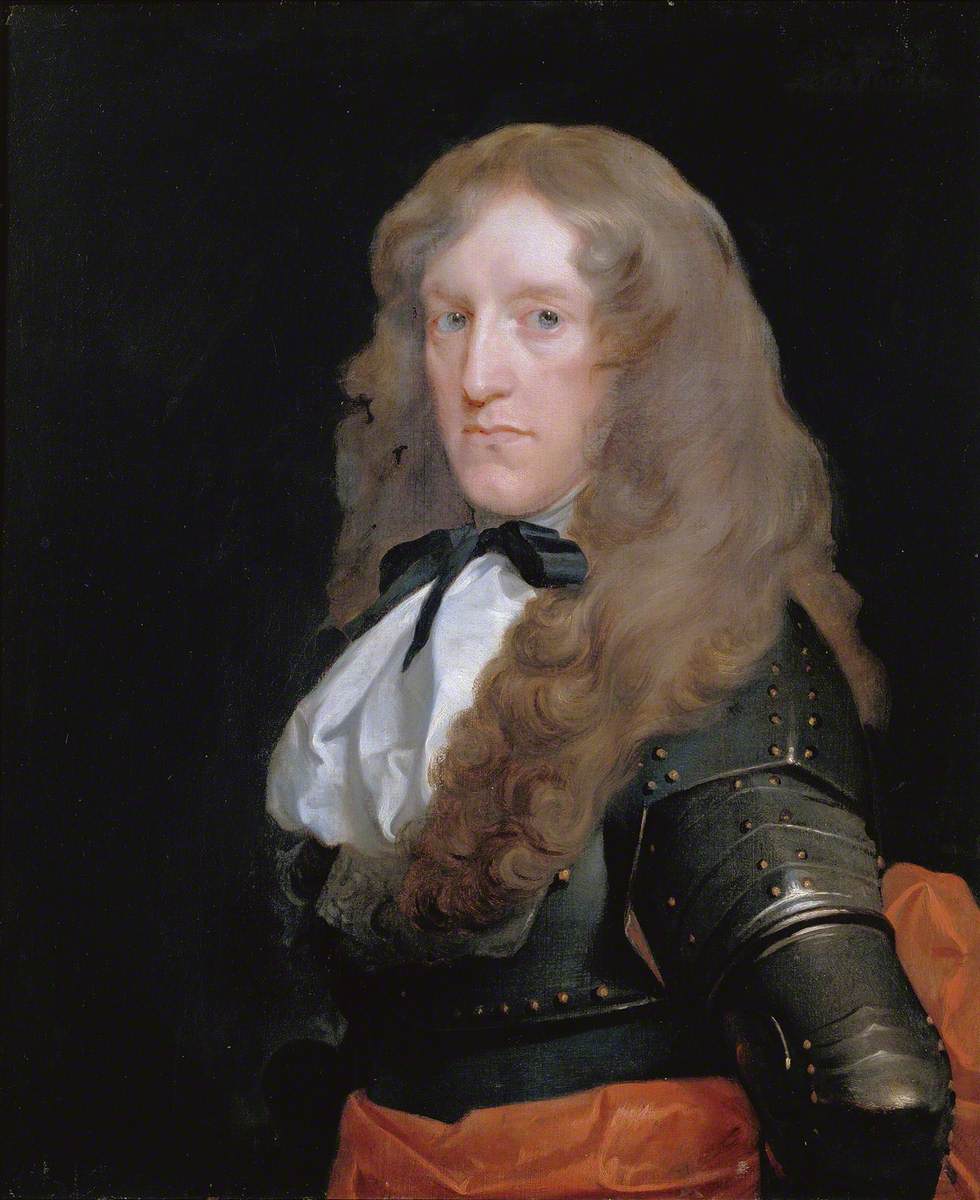 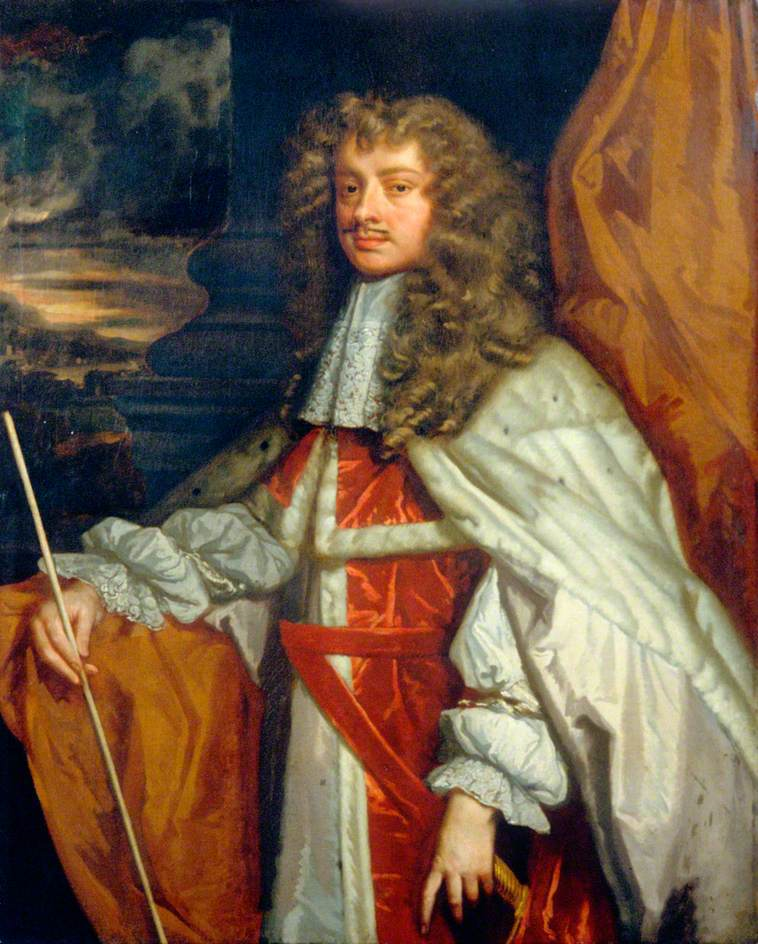 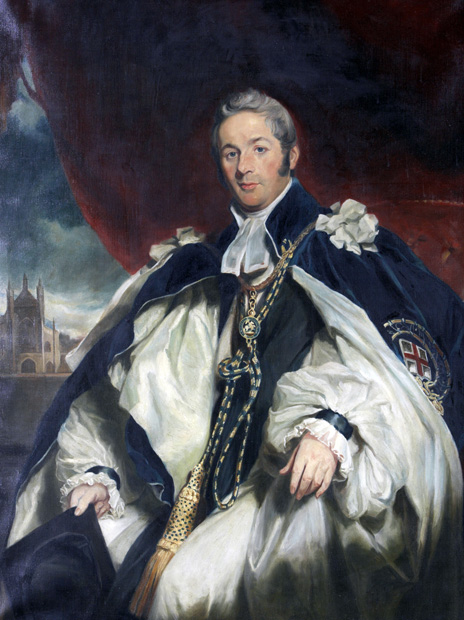 was returned into England, he first of all thinges elected into the societe of saynct George, vulgarely called the Order of the Garter, Alphose duke of Calabres sonne, accordyng to his deire whiche Alphonse was sonne and heyre to Ferdinand kyng of Naples,& after kyng of the same realme, til he was ouercome by kyng Charles. And after, the kyng sent Christopher Vrsewike, Ambassadour with y gartier, coller, mantell, and other habiliamentes apperteyninge to the companyons of the sayde noble ordre. Which Ambassadoure arryuing at Napels, deliuered to the duke the whole habile, with all the ceremonies and devre circumstaunces therunto belonging. Whiche duke very reuerently receaued it, and with more reuerence reuested him selfe w thesame in a solempne presence, thinkyng .that by this apparell and inuestittire, he was made a freride and compaygnion in ordre with j king of England, whose frendship obteyned, he feared nothing the assautes or inuasions of hys enemies. And this was the cause that he desyred so muche to be compaygnion of that noble order, fermely beleuyng that y kyng of England souereygne of that ordre, should be aider and mainteyner of hym agaynst the Frenche kyng, whome he knew woulde passe the moutaynes and make warre on hym. But this custome of assistece in ordres was, eyther neuer begonne, or before clerely abholished: For in our tyme there haue bene many noble men of Italy, compaignios as well of the golden Flese in Burgoyne, as of the ordre of sainct Mighel in Fraunce, that haue bene banyshed and profligate from their naturall countrey, and yet haue not bene aided by the souereigne nor copanyons of thesame order. For surely the statutes and ordinaunces of all thesayde orders dothe not oblige and bynde them to that case, but in certayne poyntes. After this the duke dimissed the Ambassadour, rewardyng hym moost pryncely.

Knight of the Garter

Lady of the Garter

Chancellor of the Order of the Garter

Lord Chamberlain to the Queen

Justices of the Peace

Knights of the Shire

Speaker of the House of Commons

Father of the House of Commons

Chaplain to the Speaker of the House of Commons

Clerk of the Acts

Clerk of the Cheque

Clerk of the Green Cloth

Clerk of the Signet

Chief Justice of the Marches of Wales and Chester

Chief Justice of the Bench in Ireland

Keeper of the Great Park

Lord Keeper of the Great Seal

Commissioner of the Great Seal

President of the Council

Council of the Marches

Society of Antiquaries of London