Gerulfing to Grosvenor is in Armorials.

Hohenstaufen. Sable a lion rampant or.

Giffard. Gules Three lions passant guardant or in pale or.

After 1262. St Mary's Church Boyton. Monument to Alexander Giffard -1262. Believed to represent Alexander Giffard; possibly his father Hugh Giffard 1195-1246. Early Medieval Period effigy. Alexander fought on the Seventh Crusade and may possibly have died at the Battle of Mansoura in 1250. The effigy notable for the Otter at his feet, biting his sword, and for the

Giffard on the shield with a label five points indicating the son, possibly grandson, of the current owner of the arms. Right Leg over Left.Giffard Arms

In 1625 John Sydenham V 1568-1625 (57) died. Monument at St Andrew's Church Brympton d'Evercy.
A Corinthian column at each corner supports the fine canopy, and the whole is adorned withmany coats of arms, which,commencing on the north side, illustrate, as it were, the pedigree of the family. On either side the canopy is surmounted by the arms ofSir John Sydenham, on the north impaling those of his first wife, and on the south the arms of his second;each coat is flanked by a small shield supported by a ram. Bound the edge of the canopy are thirteen shields, on which are impaled the arms brought inby various atches. On each side of the tomb itself are three large shields:those on the north side bearing the arms of Sydenham, impaling those of Audley Arm, Bruges, and

Godolphin, with their various quarterings;on the south are the arms of John Sydenham (36), who erected the monument, his sister impaled with those of her husband Edward Paston, and another coat in which the sinister side is not filled in. Probably it was meant to await the marriage of Sir Balph Sydenham (34), a younger brother of the founder. At the west end base is the large quartered coat of Sir John Sydenham, impaling the arms of Buckland with its nine quarterings. At the head of the tomb, surmounted by the helmet, crest, and lambrequin, is the—Sydenham coat of twelve quarterings, beneath which is the following inscription:
My foundir Sydenham, match'd with Hobye's Heyr,.
Badde me inform thee (gentle Passenger).
That what hee hath donne in mcc is onlie meant.
To memorize his father and s discent.
Without vayne glorye but he doth intreat.
That if thou comst his legende to repeate.
Thou speak him truly as he was and than — Report itso, hee dyed an honest mane.
10 November 1626.
The main armorial as follows: 1 Sydenham Arms 2 Kitsford Arms 3 Dalingrige Arms 4 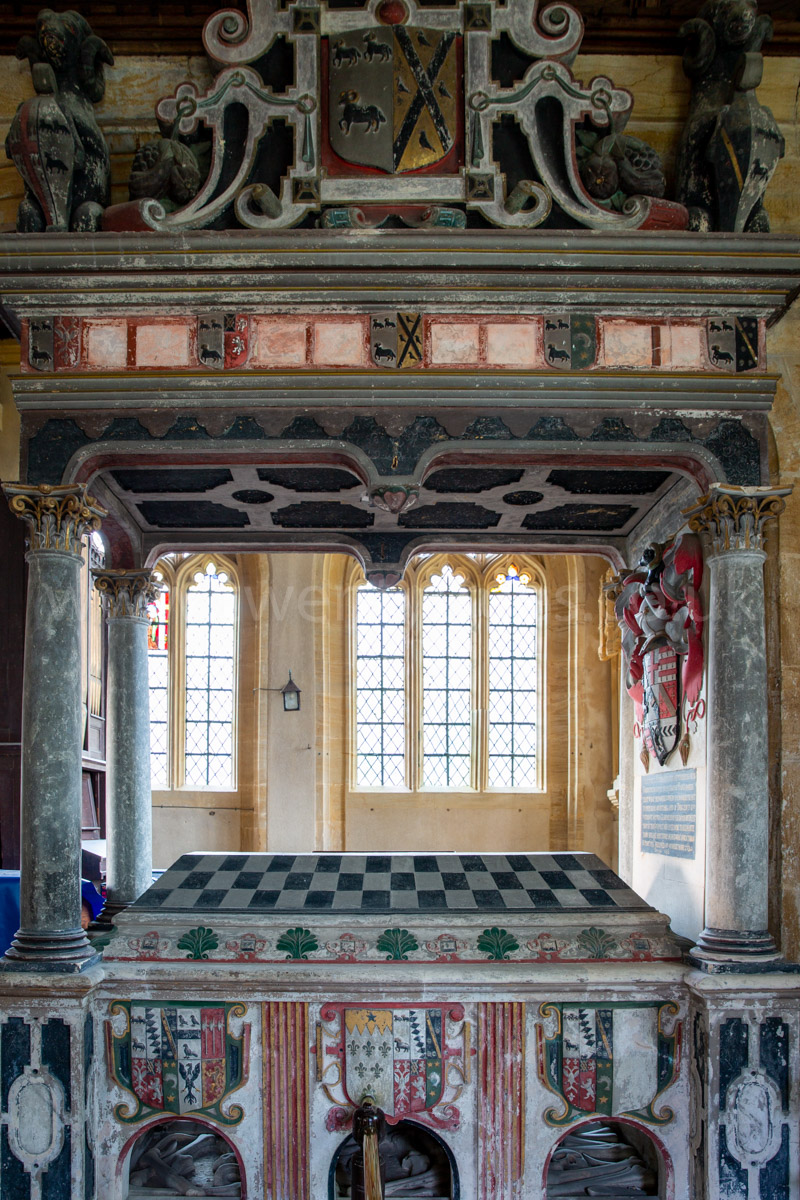 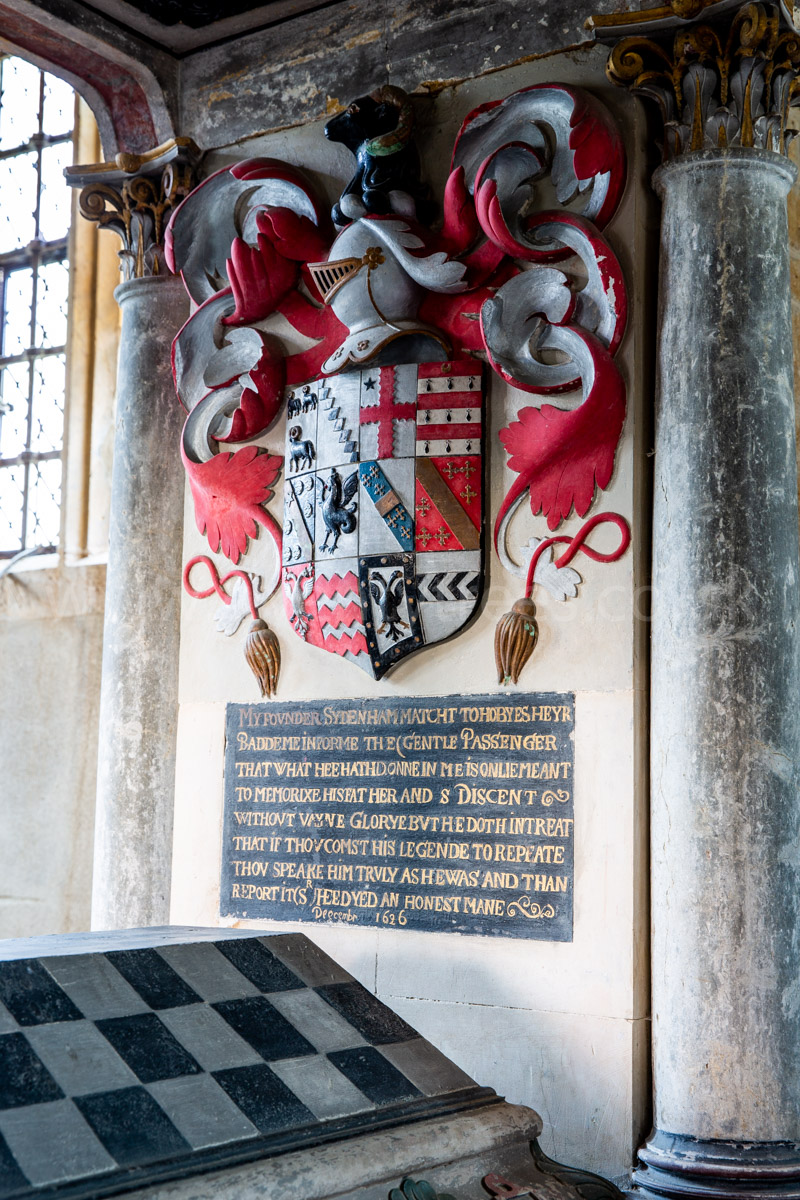 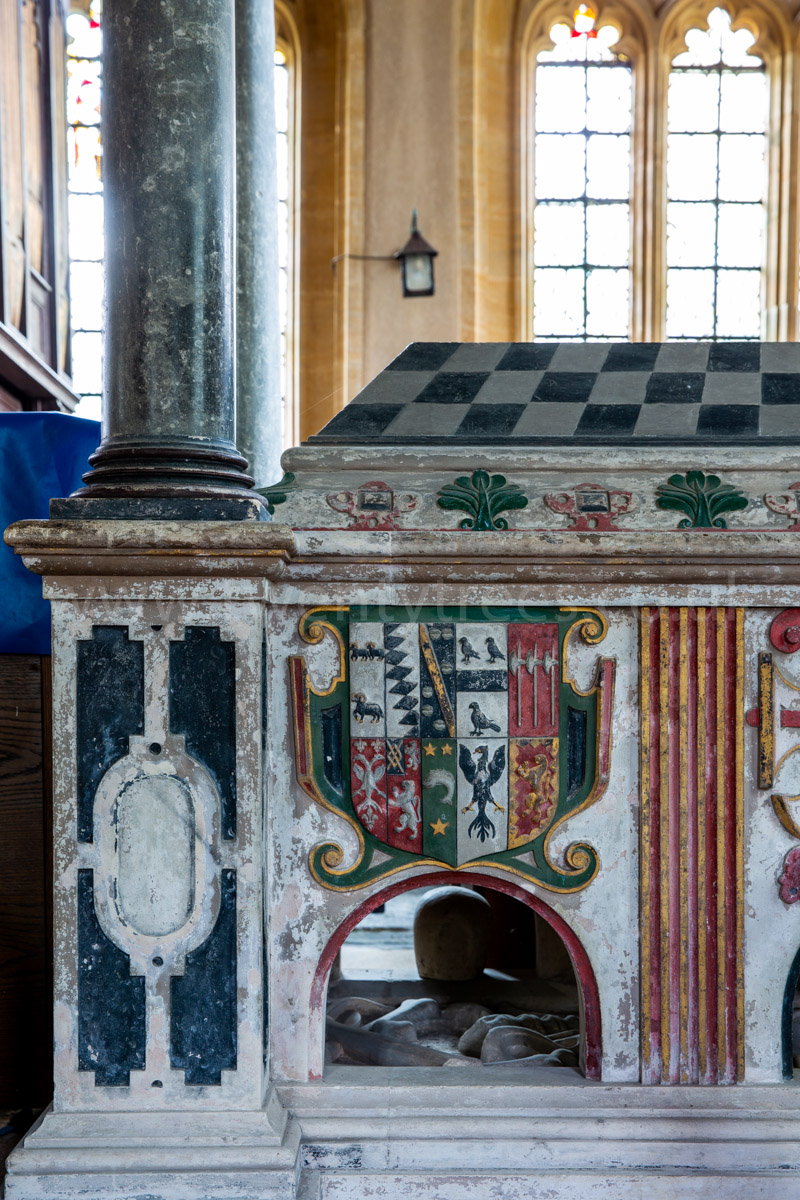 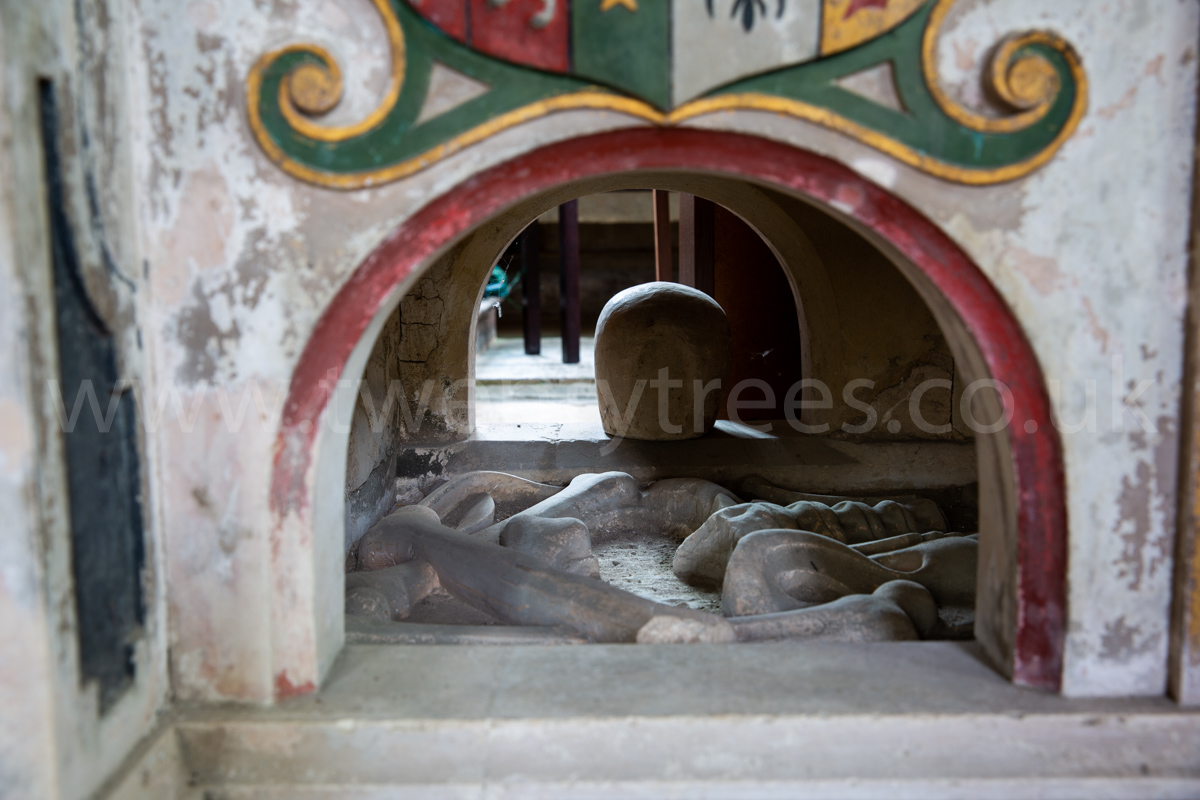 Gorges. Lozengy or and azure, a chevron gules. Source.

Graham. Or an a chief sable three escallops argent. Source.

Greville. Sable a cross in a border Engrailed or with five roundels sable on the cross. Source.

Mandeville differenced with an escarbuncle, Chetwyn, Belhouse (the lions should be shown between three black cross-croslets), and

Brandon (the lion's crown should be per pale gules and Argent). 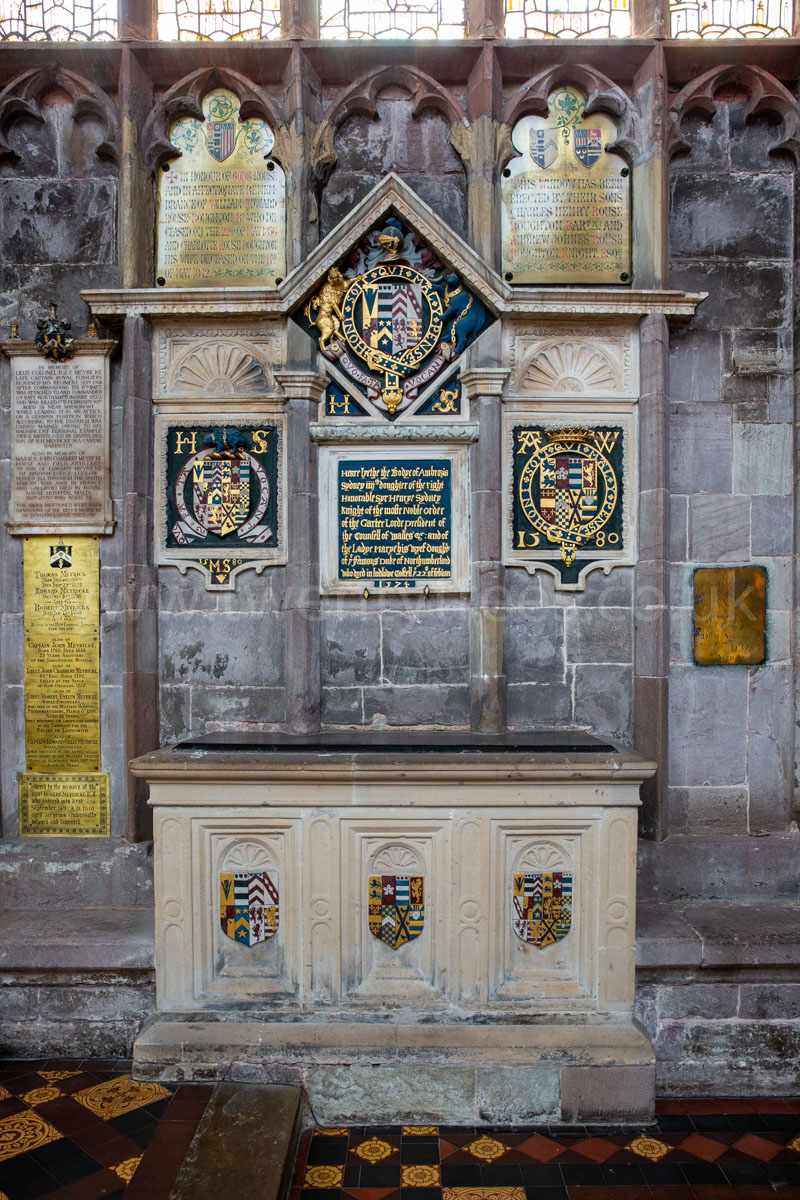 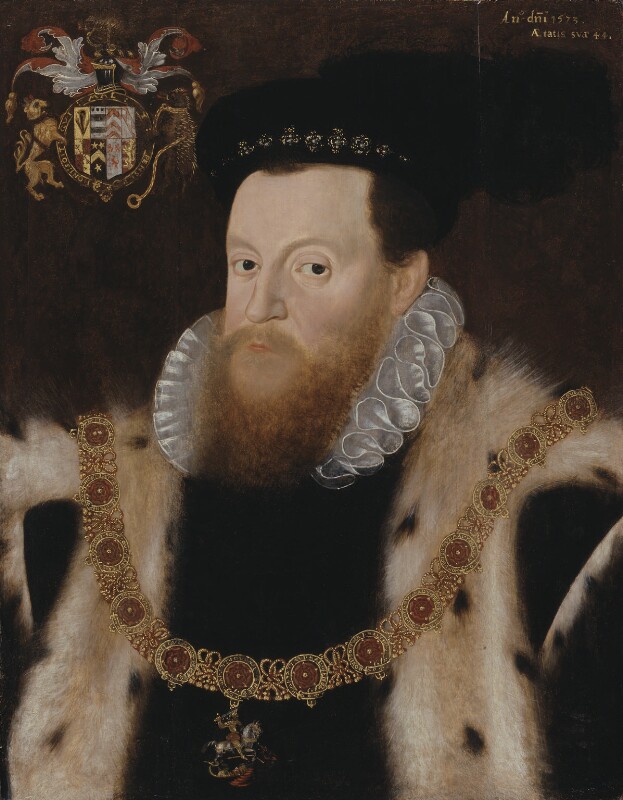 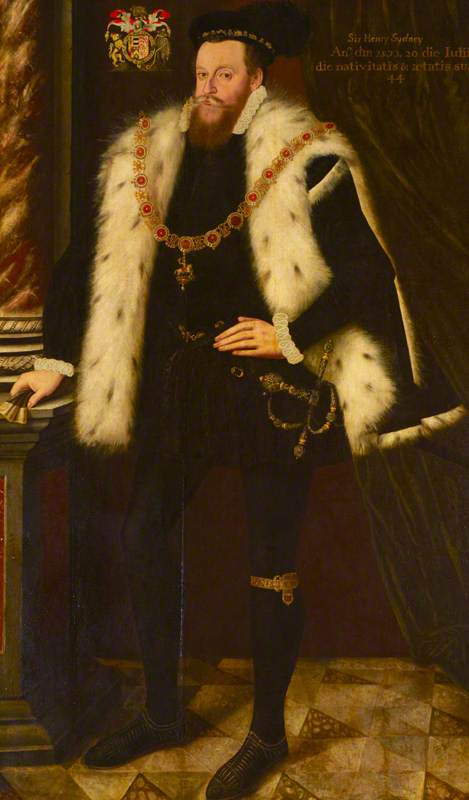 Grosvenor. Azure a garb or. Source.